Banking Via a Cellphone and a Shack – WSJ.com

KHAYELITSHA TOWNSHIP, South Africa—Mavis Nonkongozelo walks up to the Five Sisters convenience store here, then pulls a mobile phone from her bag and a few rands from her brassiere. She is ready to bank.

With a few taps on her cellphone, the 34-year old preschool teacher connects to a nascent mobile-banking network aimed at Africa’s new consumers. The saleswoman accepts a 20 rand ($2.94) bill through a barred window and then taps back on her cellphone. Soon, the money is credited to a special no-fee account at Standard Bank, South Africa’s largest. 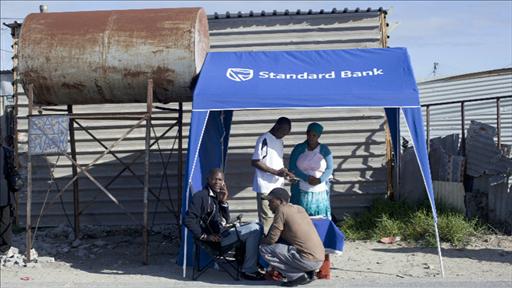 Africa’s banking picture is changing, thanks to rising incomes and spreading use of mobile phones. In South Africa, Standard Bank is breaking from its main business in favor of a low-cost mobile phone model. WSJ’s Peter Wonacott has details. 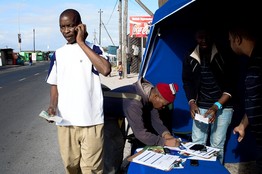 From this corrugated-metal shack outside Cape Town, Standard is breaking from its main business of drawing customers to its branches and automatic teller machines in favor of a low-cost mobile-phone model that is based on proximity to people, like Ms. Nonkongozelo, who have never banked before. The shift says a lot about where banks are placing bets on Africa’s economic growth as a new middle class emerges.

Since an official launch last year, Standard has opened more than 8,300 of these so-called “bank shops” at sites ranging from street-side convenience stores to raucous taverns. By the end of this year, Standard intends to have 10,000 set up around the country, mostly in South Africa’s predominantly black townships, and has recruited local sales agents to find customers. The shops aim to tap what executives estimate is a pool of about 15 million people in South Africa, or about 30% of its population, who don’t have active bank accounts but now have the means to spend and save.

Standard doesn’t charge for this type of account, but the bank earns small commissions on cash transfers and those who stock up on mobile-phone credit. “It’s not a golden pot of money,” says Thoraya Pandy, one of the managers at Standard spearheading the mobile-banking program. “We need to bring in loads and loads of customers.”

The dearth of banks in Africa has long constrained the flow of capital and economic growth. Most banks deemed the costs of expanding branch networks too high and the return from poorer customers too low. Only 20% of African families have bank accounts, according to the African Development Bank. And there are Nearly nine times as many people in developed countries borrowing money as in Africa, according to the World Bank.

The Next Continental Shift

Multinational corporations are racing to make the most of Africa’s burgeoning middle class. With reporters on the ground there, a Wall Street Journal series examines the changes.

Even in South Africa, the continent’s richest economy and the one with the heaviest concentration of banks, rural residents rely on taxi drivers to transfer cash between towns. The drivers typically take 10% of the total. But Africa’s banking picture is changing, thanks to rising incomes and spreading use of mobile phones.

In a new report, the African Development Bank estimated that a consumer class—defined as those who have $2 to $10 a day to spend—has grown to about 300 million, a critical mass the size of similar middle classes in China and India.

At the same time, mobile-phone subscriptions in Africa have jumped from 90 million in 2005 to an estimated 333 million in 2010, according to the United Nations. In South Africa alone, cellphone-banking subscriptions—offered by all of the country’s big four banks—grew 21% between July 2009 and June 2010, according to the most recent figures from the nation’s central bank. As a result, financial firms are deploying mobile-phone services to reach once-unreachable customers.

South Africa’s First National Bank is using mobile banking to expand into neighboring African countries. Standard is rolling out its mobile-bank-shop model in Nigeria, the continent’s most populous country and one of the fastest-growing economies.

Meanwhile, Western Union Co. has teamed up with M-Pesa, a unit of Kenyan telecommunications firm Safaricom, to conduct money transfers with other parts of the world via text messages. M-Pesa now has 14 million customers, partly because it caters to people banks have neglected, according to Khalid Fellahi, a senior vice president at Western Union.

“Africa is the hot spot for these kinds of services,” he says.

Still, managing and expanding a business that relies on high volume and thin profits isn’t easy. A study released last month from the Monitor Group, a global consulting firm, identified 439 initiatives selling to African consumers living on less than $2 a day, but it said most of them were struggling to turn a profit. The study’s lead author, Michael Kubzansky, said financial firms that found ways to reach poorer customers through retail outlets—and even churches, in the case of one insurance company— improved their odds for success.

But even banks that have aggressively courted Africa’s lower-income consumers say mobile phones and retail outlets can’t substitute, at least in the short term, for a bank counter. “When a client has a problem, they want to talk to someone,” says Carl Fischer, head of marketing and corporate affairs of Capitec Bank Ltd., a South African firm that offers low-cost banking. “Changing that behavior is very tricky.” 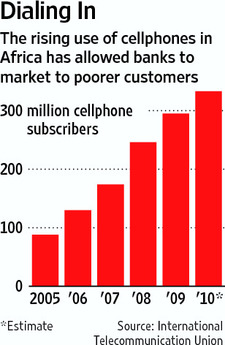 For Standard, the bank-shop rollout hasn’t come without glitches. Some stores have closed abruptly after the proprietors found steady work or returned to their home villages.

But the experiment makes sense from a cost perspective, says Coenraad Jonker, one of the Standard bank executives behind the bank-shop program. ATMs have been targets for armed gangs. So instead of automatic-weapon-wielding guards transferring money, a palm-size machine at a bank shop can do the same with a cellphone signal.

“It used to be our central concern was security. Now it is accessibility,” he says.

Standard conducts background checks of potential merchants before it sets them up as cash-transfer points. It screens for criminal records, looks into credit history and makes sure the area where they operate has cellphone coverage as well as electricity. Those selected are then taught how to use the mobile-banking system.

Standard doesn’t pay merchants, but many see the benefit of being associated with one of South Africa’s most-recognized brands. Five Sisters even painted its store the same color as the blue Standard Bank banner that hangs down the side of its shack.

On a recent Friday afternoon, a butcher who had been cleaving meat from goat carcasses next-door came to the window to make a deposit. She took a mobile phone and money from a smudged apron pocket and completed the transaction in minutes.

Next up: Ms. Nonkongozelo. She was never able to save money before. Now, the preschool teacher and single mother of three has 240 rand in her account. It helps, she adds, that walking to the nearby Five Sisters feels safer than a longer trudge to an ATM, where, in her high-crime neighborhood, she runs the risk of being mugged.

“Somebody may think I’m coming here to buy an egg,” she says. “They don’t know I’m here to withdraw money.”

—Jackie Bischof in Johannesburg contributed to this article.