Capitalist guilt is nearly as old as capitalism itself, but it has seen a resurgence since the financial crises of 2007. Bill Gates, history’s most successful capitalist, started it off with his speech in 2008 at that snow-covered confessional of global capitalism, the World Economic Forum in Davos, Switzerland. Troubled by the fact that the pharmaceutical companies were paying more attention to finding a cure for baldness than for malaria, Mr. Gates called for a new system of “creative capitalism.”

Michael Porter, a Harvard Business School professor, pitched the same snow-booted audience three years later with his ideas for “shared-value capitalism.” Business leaders, he argued, were too focused on short-term financial gains and needed to pay more attention to the well-being of customers, the depletion of natural resources, the viability of suppliers, and the concerns of the communities in which they produce and sell.

Now come Whole Foods co-CEO John Mackey and Raj Sisodia, a marketing professor at Bentley College, with yet another take on the subject (and yet another moniker): “Conscious Capitalism: Liberating the Heroic Spirit of Business.” Like other such efforts, it will leave Milton Friedman, scourge of the corporate social-responsibility crowd, spinning in his grave. But even the most determined profit-maximizers may find ideas here that challenge deeply held beliefs.

Mr. Mackey may seem a strange leader for a new capitalist movement. His sojourn started in the counterculture of the 1960s and 1970s, where he practiced Eastern religion, yoga, liberal politics and vegetarian eating (he is a vegan today) on his road to business success. And he earned notoriety from a bizarre episode in 2007 when the Federal Trade Commission uncovered his messages attacking a competitor under an assumed name on a Yahoo message board.

What is refreshing about the Mackey-Sisodia take is that they aren’t advocating some bolt-on solution to the capitalist model. Rather they argue that the mathematical framework of free-market economics—developed by neoclassical economists in the 20th century—fundamentally mischaracterizes the true nature of capitalism. 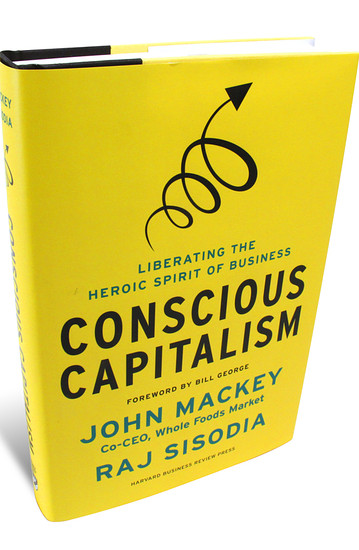 “With few exceptions,” the authors write, “entrepreneurs who start successful businesses don’t do so to maximize profits. Of course they want to make money, but that is not what drives most of them. They are inspired to do something that they believe needs doing. The heroic story of free-enterprise capitalism is one of entrepreneurs using their dreams and passion as fuel to create extraordinary value for customers, team members, suppliers, society, and investors.”

Unlike commentators who defend capitalism while expressing some doubt or disapproval—think of Irving Kristol’s 1978 neoconservative manifesto, “Two Cheers for Capitalism”—Messrs. Mackey and Sisodia are unapologetic enthusiasts. “This is what we know to be true,” they declare in the first chapter. “Business is good because it creates value, it is ethical because it is based on voluntary exchange, it is noble because it lifts people out of poverty and creates prosperity.” The challenge, they say, is to make capitalism more “conscious” of its heroic nature.

What does that mean? Well, first, the authors say, it means having a clear purpose, beyond just making money. Purpose usually exists when companies are created, they claim, but often gets lost along the way. “When any profession becomes primarily about making money, it starts to lose its true identity and its interests start to diverge from what is good for society as a whole.” The authors cite Google and Southwest Airlines as companies with purpose, pharmaceuticals and financials as industries that have lost theirs.

Second, conscious businesses consider the needs of all their stakeholders—which is to say, everyone touched by the business: employees, suppliers, customers and affected communities, as well as investors. It is that mind-set that, the authors argue, has led Whole Foods to adopt an unusual approach to compensation. The company’s pay policies are transparent: Everyone knows what everyone else is making; the top seven executives make exactly the same pay and bonus; and total cash compensation for those at the top is capped at 19 times the average, a far cry from most companies, where top executives earn more than 100 times the average. Finally, conscious businesses have conscious leaders, who are “primarily motivated by service to the purpose of the business and its stakeholders, and not by the pursuit of power and personal enrichment.”

This all sounds a good bit more idealistic than Adam Smith’s invisible hand, guided by enlightened self-interest. Naysayers will no doubt continue to channel Milton Friedman and argue that conscious capitalism carries the same pitfalls as creative capitalism, shared-value capitalism and corporate social responsibility. In an increasingly Darwinian global business environment, it threatens to seduce business leaders into taking their eyes off the profit ball. Pepsi CEO Indra Nooyi, a favorite of Messrs. Mackey and Sisodia, is often cited as the latest example of the danger. Her efforts to sell healthy snacks to the world, critics say, have caused her to stumble in the sugar-water war.

But at a time when the public reputation of big business has hit a dangerous low, surely the efforts of Messrs. Gates, Porter and Mackey—and even Ms. Nooyi—to make capitalism better can’t be all bad. As the authors put it: “Free market capitalism is one of the most powerful ideas we humans have ever had. But we can aspire to even more. Let’s not be afraid to climb higher.”

Mr. Murray, a former deputy managing editor of The Wall Street Journal, is president of the Pew Research Center in Washington.