Say goodbye to the old playbook: The best opportunities are no longer where you’d expect.

When Taizo Ishida first set eyes on Bangladesh, he thought the images would stay with him forever. Posted there in the 1980s as a United Nations development officer, Ishida saw little but abject poverty wherever he turned. Lacking a reliable power grid or even the most basic of public services, the South Asian country was a tragic archetype of the developing nation, Ishida thought — or, rather, he did until last year. That was when Ishida, now lead manager of the top-ranked Matthews Asia Growth fund, returned to Bangladesh for the first time since his U.N. days. What he found left him utterly awestruck: Here, if ever he’d seen one, was a runaway investment boom.
Dhaka, the nation’s capital, was abuzz with construction projects, as the city transformed itself into a hub for the global textile-manufacturing industry. Real estate prices mirrored those of some tony Manhattan neighborhoods. (A friend of Ishida’s bought an apartment a little more than a decade ago for $60,000, and it’s now worth $1 million.) Share prices in the country’s burgeoning stock market, meanwhile, had tripled in the previous 15 months. “It’s still very poor, but the market has exploded,” marvels Ishida, who is now waiting for valuations to fall a bit before he invests.

Bangladesh? Seriously? It’s not the sort of thing you’d catch surfing Google Earth, but make no mistake: The map of the investment world has changed dramatically over the past two years — and to hear many intrepid money managers tell it, the topography is transforming just as fast today, as markets across the globe undergo seismic shifts from week to week. The countries that once thundered with Olympian returns — Brazil, China, India and Russia — now, well, seem almost mortal by comparison. The path to profits, even in these well-traveled lands, is not what it was just a few years ago. And, in turn, places long since dismissed euphemistically as “developing nations” are advancing far more rapidly than ever expected.

Mark Mobius, an emerging-markets pioneer who oversees about $50 billion in assets for Franklin Templeton, has been buying up property in Romania, banks in Nigeria and oil shares in Kazakhstan. Laura Geritz, comanager of the Wasatch Emerging Markets Small Cap fund, met this summer with CEOs and local investors in Ghana — which now has some 30 publicly traded companies on its national exchange.

Leading investors are finding bargains well off the beaten path. Click below for four hot spots. 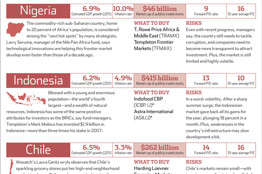 The reasons behind the changes are many, ranging from the slowing of economies in China and India to the arrival of new consumer markets to the surprising way in which the debt crisis is playing out on the international stage. And, of course, there’s one more big why: The old playbook has stopped working. Consider that over the 10 years ended in December 2010, the benchmark Morgan Stanley (MSCI) Emerging Markets index outpaced the S&P 500 by a total of 250 percentage points; in the time since, the index has trailed the S&P by seven points. “It’s not that the emerging-markets opportunity is tapped out,” says Maria Negrete-Gruson, a 20-year denizen of this investing realm who heads a nearly billion-dollar portfolio for Artisan Funds. “It’s just not in the same places.”

The one thing that hasn’t changed, veteran investors will tell you, is the risk. And the volatility. And the everyday intrigue that comes with making a wager in any betting parlor where you don’t speak the language, understand the customs or have a place to duck should shooting break out. Emerging markets, after all, are the sorts of places where an exchange can fall 17 percent in a day, as the Russian Micex did one unlucky Tuesday in September 2008. (The S&P’s biggest one-day drop during the Lehman Brothers crisis: barely 12 percent.) Indeed, the average diversified emerging-markets fund fell 54 percent in 2008, according to Morningstar, a loss that was 17 percentage points worse than the broad U.S. market’s drop even in the throes of the Great Recession. Even as recently as this fall, the sector as a whole took one heck of a wallop, with the MSCI Emerging Markets index sliding 18 percent over the past three months — about three times as bad as the S&P 500’s drop. A currency crash, dive in commodity prices or change in government can transform market dynamics in seconds (take, for instance, the double-digit losses in most Peruvian mining stocks the day after a new government was elected this past June).

Still, emerging-markets managers somehow put aside such fears as they scour the globe for the same elusive thing — the El Dorado of investments. And yet, a new world and new order has meant shifting gears, rethinking asset classes and, yes, moving clients’ money around. So where are the most sophisticated treasure hunters staking their claims today? Our guide to adventure investing offers some clues.