The birth of a virtuous new asset class 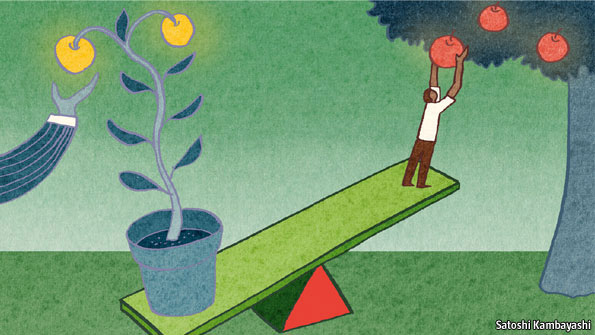 “BACKING someone to live,” is how Leapfrog Investment’s first deal is described by Jim Roth, the co-founder of the “profit with purpose” private-equity firm. That was two years ago, a $6.7m stake in AllLife, a South African firm that provides life insurance to people with AIDS and infected with HIV, subject only to the condition that they submit to regular blood tests to prove they are taking their life-saving anti-retroviral drugs.

“This provides cover to people whom other insurers shun, makes it possible for them to get other financial services like a mortgage, and is highly profitable,” says Mr Roth. Other microinsurance investments have followed, in Kenya and, this week, in an Indian firm called Shiram that distributes savings, insurance and investment products to millions of poor people.

How Leapfrog’s investments perform will be closely watched. Although its $135m fund is small, Leapfrog is one of the potential stars of what JPMorgan last year described as an emerging new alternative-asset class called “impact investments”, designed to yield both a financial return and a broader benefit to society. The latest $15m investment is intended to help Shriram grow within a year to serve 10m people, 85% living on less than $2.50 a day. But it should also “generate private-equity returns”, says Mr Roth, which should mean several percentage points a year more over a decade than a stockmarket index.

Not everyone is convinced that impact investing is a true asset class. “Impact investing touches every asset class,” says Ron Cordes, who made a fortune in traditional finance before co-founding Impact Assets, an intermediary focused on building up the sector. “But many people think hedge funds are an asset class, and by that yardstick impact investment is, too.”

Mr Cordes shares the bullishness of JPMorgan, which predicts that by 2020 there could be between $400 billion and $1 trillion invested this way, generating cumulative profits over ten years of between $183 billion and $667 billion. There is already demand from a broad mix of investors, as Leapfrog illustrates. Its backers range from philanthropists such as George Soros, a hedge-fund manager, and Pierre Omidyar, the founder of eBay, to banks, reinsurers and pension funds.

These investors have greater choice than ever. Five years ago anyone wanting explicitly to combine financial returns with virtue was limited to investing in social housing for poorer people in rich countries, microcredit and a handful of ethical mutual funds that shun sinful shares such as tobacco and defence companies. In June Impact Assets published a list of the top 50 impact investors, ranging from Blue Orchard, which has invested around $1 billion in microcredit, to IGNIA, which is investing its first $100m fund in growing small businesses in Latin America and is about to start raising a second fund.

What differentiates an impact investor from a regular sort is much debated. “It is about having the right intentions, to improve the world as well as make money, and about taking seriously the process, especially measuring social performance,” says Jed Emerson, co-author of a new book on impact investing. Leapfrog has turned down investments that a regular fund might have made: Mr Roth gives the example of a fast-growing African insurer that makes large profits by doing all it can to avoid paying claims. But the tensions between business and social principles are not always easily resolved: one worry is that warm-hearted types may be reluctant to fire underperforming managers.

Other hurdles must be overcome if impact investing is to soar. New regulations are needed (to clarify, for instance, whether pension funds can invest with an explicitly social purpose). More people need to be tempted out of mainstream finance. Better metrics for social impact are essential. None of this is easy, especially in turbulent times. On the other hand, Mr Cordes says that the penny dropped for him in 2008, when the financial markets crashed and “microfinance debt was the top-performing piece of my portfolio.”

from the print edition | Finance and economics