India Has Millions of Female Entrepreneurs and They Need Easier Access to Money – WSJ.com 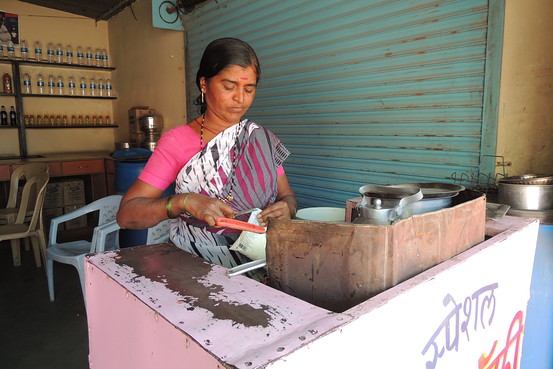 A female entrepreneur at her tea shop in the western state of Maharashtra.

While there may not be many women occupying the executive offices of India, the country is home to literally millions of female entrepreneurs, in charge of their own tiny businesses, according to estimates by the International Finance Corp.

The number of women running their own businesses in India is expanding and banks need to find more ways to serve them, said a report this week from the IFC, which is the private-sector arm of the World Bank.

Women in India fully or partially own around three million small enterprises across the country. Their businesses include everything from tea stalls and vegetable stands to laundries and cellphone shops. The women-backed businesses employ over eight million people in India, according to the IFC report.

A large majority of these budding businesses depend on informal avenues to raise money. That means that they have to turn to family members, friends and loan sharks to get the capital they need to start and expand.

The report estimates that the total financial requirement for women entrepreneurs was $158 billion in 2012 but they only had access to around $42 billion from formal lenders. Only 27% of their money needs were met through formal lending institutions such as banks, cooperatives, micro lenders and other non-banking finance companies.

Male entrepreneurs get as much as 70% of their financing from formal lenders, depending on which industry and state they operate in.

Financial institutions need to adapt to accommodate women, the IFC said.  While close to 80% of women-owned enterprises are in the service sector, most bank lending is for manufacturing. Another obstacle for women entrepreneurs is that banks often require collateral for loans, which women often don’t have here because of social, legal andcultural restrictions on inheritance and land ownership.

More than 90% of India’s 90 million plus microfinance clients are women, according to the report. But microfinance is not enough. While the tiny loans serve the needs of tiny enterprises, they are not sufficient to help women grow their businesses and generate more employment.

In November last year, the Indian government launched the country’s first state-owned bank for women, aiming to open 25 branches across the country by the end of this month.

Banks need to create new products and services for women, the IFC report said. They also need to build a more welcoming environment for women entrepreneurs and provide them non-financial services such as training.

“There is a strong case that serving women entrepreneurs makes significant business sense,” the report says, citing studies that show women often have a better track record than men at repaying loans and running profitable businesses.