By ERIC BELLMAN
.
Hyderabad, India
.
SKS Microfinance Ltd. moved a step closer to bringing Wall Street to the slums of India. But that also will bring more criticism from microfinance experts who say profits and initial public offerings have no place in the industry.
.
SKS won approval from the Securities Exchange Board of India to proceed with an IPO, according to people familiar with the situation. The company and its early investors expect to raise more than $250 million from the deal, which is likely to happen within 30 days and would make SKS the first microlender in India to go public.
.
Only a handful of microlenders around the world have made it to the global stock markets, so the SKS deal could encourage other companies in the sector to follow. SKS is the largest microlender in India, with a portfolio of about $1 billion. About $5 billion in microloans were made in the country last year, and the IPO would help SKS borrow money to fuel expansion.
.
“The only place you can get the amount of money that is needed to help the poor is in the capital markets,” Vikram Akula, founder and chairman of SKS, said in an interview. “That’s why we are doing this IPO.”
.
But as SKS’s executives and investment bankers went on a roadshow to stir up interest in the shares, they stressed how little profit the company makes. The strange sales pitch reflects sensitivity to accusations that SKS is gouging borrowers even as its makes millions of tiny loans to poor families.
.

Mr. Akula has a decades-long relationship with Nobel Prize winner Muhammad Yunus, the founder of Bangladesh’s Grameen Bank, who is credited with sparking the microfinance revolution. The two men now stand on opposite sides of the question of whether altruism and capitalism can coexist.
. 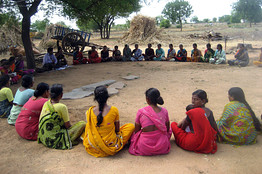 Eric Bell/The Wall Street Journal – Women sat in a circle in a weekly meeting of the SKS borrowers in one village in Andhra Pradesh.
.

“Microcredit should not be presented as a money-making opportunity. It is an opportunity to make an impact on poor people’s lives,” Mr. Yunus said in an interview. “An IPO gives a wrong message.”
.
Mr. Akula, a 41-year-old U.S. citizen and Yale University graduate, launched SKS in 1998 after working in nonprofit organizations in India that tried to help the poor. Even the best-run groups lacked the capital or the organization to meet the needs of the world’s poor, so he decided to build a new kind of microlender that wouldn’t have to depend on government money, grants and charity.
.
Before launching the company that would become SKS, Mr. Akula went through the training program at Grameen Bank, telling Mr. Yunus that he wanted to tweak his model to reach more people. “If I remember correctly, he just smiled,” Mr. Akula said.
.
Mr. Akula started on his own with a small team that went from village to village in the southern state of Andhra Pradesh. He used the Grameen model, which sets up groups of poor women and lends them as little as $50 to help with small businesses like growing vegetables or running a tea stand.
.
He also took cues from McDonald’s Corp. and Starbucks Corp., standardizing training and lending procedures to cut costs and accelerate growth. Employees were paid a decent wage so that Mr. Akula wouldn’t have to rely on volunteers and regional managers from top, rural business schools. And he built in enough profit to make the business appealing to institutional investors.
.
The debate about profit’s place in the microlending market exploded in 2007 when Mexican microlender Banco Compartamos SA listed its shares. Its original investors and founders took home millions, sparking accusations that they were profiteering from the poor by sometimes charging more than 80% annual interest.

Mr. Yunus contends that any microlender charging borrowers more than 15 percentage points above its cost of capital needs to cut costs or profits—and pass the savings on to the poor. SKS charges around 18 percentage points above its cost of capital.
.
“Vikram is a very capable young man,” Mr. Yunus said. “But he took a wrong turn when he decided to use microcredit for making money.”
.
Mr. Akula said he needs to build in around five percentage points of profit to expand, adding that Mr. Yunus’s expectations are too high because his experience is in markets likes Bangladesh, where he didn’t have to deal with the high costs of reaching remote villages.
.

Some analysts and investors are worried that the growth being fueled by healthy profits could result in a subprime crisis as competing microlenders give too many loans to poor borrowers who can’t repay them.
.
SKS has seven million borrowers, up from 200,000 five years ago. In the same period, the company’s profit growth has averaged more than 200% a year.
.
Mr. Akula said SKS could charge interest rates of more than 40%, instead of its current average of 28%, but doesn’t the company needs only enough profit to attract investments and lending for its rapid rollout.
.
Even after the IPO, a majority of SKS’s investors will be committed to sticking with the lower-profit model, he said.
.
Earlier this year, Mr. Akula sold part of his SKS stake for more than $10 million. He said he isn’t ashamed of the money, adding that rewarding microfinance employees with benefits closer to those in the conventional finance world is part of his business strategy.
.
—Arlene Chang contributed to this article.
.