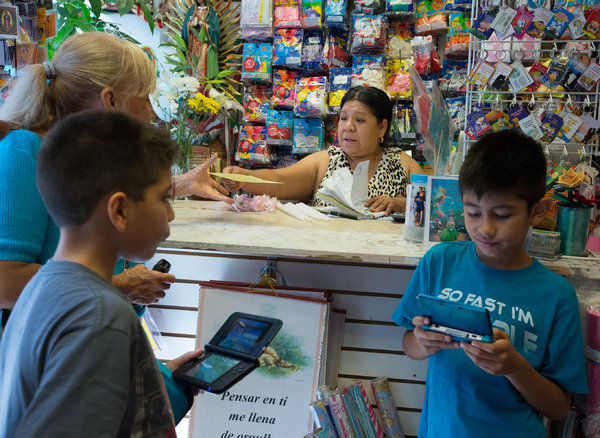 On a recent Thursday, dozens of Latina immigrants clustered in a small, noisy second-floor office in the Jackson Heights neighborhood of Queens, waiting for one of a half-dozen loan officers to call their names and hand over a check. Children loitered in the stairwell or sprawled, calflike, over their mothers’ laps.

S. M. Nural Kabir fills out papers for borrowers, many of whom lack access to credit.

The loans were recorded the old-fashioned way, with ink, in green passbooks that enumerated the borrowers’ commitments to “exercise responsible financial behavior,” “seek preventative health care” and meet each week in a “comfortable and safe place.” Aside from these words, little secured the loans in question, which ranged from $1,500 to $8,000.

This form of microcredit — the smallest of small loans, with no collateral and few questions asked — was pioneered by Grameen Bank in Bangladesh and has long aimed to ease poverty in the world’s developing countries, where rural villagers use it to buy livestock, repair motorcycles or otherwise increase their income. Since the financial crisis, microcredit has taken off in the United States, attracting thousands of clients who do not qualify for credit cards or traditional bank loans.

The purpose of the loans, as conceived by Muhammad Yunus, the Nobel Prize-winning founder of Grameen Bank, is to help countless millions of poor people unlock their inner entrepreneur, to “use money to make money,” as he put it in a telephone interview. But its newfound popularity may say more about the increasingly unstable nature of American poverty, in which credit is hard to come by and sustenance is cobbled together from part-time jobs and threatened by unpredictable expenses.

“Families in rural Africa are more like U.S. families than everyone wants to believe,” said Jonathan J. Morduch, the executive director of the Financial Access Initiative at New York University, who has studied microcredit and is taking a close look at the financial lives of low- and moderate-income Americans. “The hidden inequality in America is about fundamental security, the ability to plan.”

In the United States, microcredit has generally been defined as loans of less than $50,000 to people — mostly entrepreneurs — who cannot, for various reasons, borrow from a bank. Most nonprofit microlenders include services like financial literacy training and business plan consultations, which contribute to the expense of providing such loans but also, those groups say, to the success of their borrowers.

Grameen America dispenses with the advice and makes smaller, less formal loans at a lower cost. It hews closely to the model developed in Bangladesh: borrowers form groups of five, approve one another’s loans and make weekly payments at 15 percent annual interest, a rate comparable to those charged by other nonprofit lenders. That is far less than the rates of payday lenders, which can charge 400 percent or more.

If everyone in the group repays on time, each member is entitled to a larger loan in the next cycle. Members are supposed to be below the federal poverty line when they join and use the money for entrepreneurial purposes. Grameen does not ask if they are legal residents.

The organization’s formula has proved popular. Microlending in general has boomed, more than tripling the number of borrowers from 2008 to 2011, according to data collected by the Aspen Institute and Grameen America. Grameen was founded in 2008 and has rapidly become a leader in the field.

It has 18,000 borrowers and as of last month lent more than $100 million. There are six Grameen branches in New York and five in other cities, including Los Angeles, Omaha and Charlotte, N.C. Most borrowers, Grameen reports, repay their debt and become repeat customers. Borrowers are also given savings accounts and encouraged to save at least $2 a week.

But, with more than 45 million Americans living below the poverty line, Grameen has barely scratched the surface of the problem. And it is difficult to tell how well the program is achieving its aim of lifting people into the middle class.

In Jackson Heights, borrowers said they used the money to buy costume jewelry, Herbalife nutritional supplements or Mary Kay cosmetics for resale in home-based businesses or door to door, many supplementing income from another job like housecleaning. Some make cakes or empanadas; others tailor clothing or sell flowers. One woman buys designer clothes at closeouts and resells them from a tiny shop on the second floor of a commercial complex; another sends clothes home to the Dominican Republic, where her sister sells them on the street.

Even those with established storefronts have turned to Grameen. Guadalupe Perez, 51, took a loan when business fell off during the recession. She and her husband were having trouble paying rent on the party decoration store they had started with their life savings. “It opened up a way for me to keep my business,” she said through an interpreter, standing near a display of ribbons and wine glasses that she had embellished with glittery designs. “I wanted to hear what the rules were for Grameen because I was afraid of going to a bank. It was a loan that I could pay little by little; I felt it was a good choice for me.”

Donaldo Torrenegra, right, prepares a check for Juana Flores Aguirre, who will use her loan for her cosmetics business.

Shah Newaz is chief executive of Grameen America, which hews closely to a lending model developed in Bangladesh.

Ms. Perez has used subsequent loans to expand the size of her store and now plans to invest in enough tablecloths to decorate two parties at the same time. But the loans have not increased her enthusiasm for entrepreneurship. Asked whether, had she the chance to do it over, she would go into business for herself, her answer was short and simple: no.

Good data on the benefits of microcredit are scarce, and the few randomized studies have not demonstrated that it substantially improves prosperity in developing countries. In the United States, data collected by the Field program of the Aspen Institute show that microloans yield significant increases in income and create jobs. Joyce Klein, the program’s director, said the surveys had limitations but more rigorous studies that included randomized control groups would be prohibitively expensive.

Grameen says that its loan recipients have increased their incomes by an average of $2,500 during each six-month loan cycle, and that one in five hires an additional worker. But Katherine Rosenberg, a senior vice president at Grameen, acknowledged that pinning down income data is the group’s biggest challenge, because borrowers tend to think in terms of whether they have enough to cover their next bill, not how much they make over all. Ms. Rosenberg said many clients may not earn more but instead work less, dropping one of several low-wage jobs or taking advantage of the flexibility of self-employment to spend more time with their children.

Elizabeth de Jesus, 45, is a hairdresser who, with Grameen’s help, achieved her dream of opening her own salon in Corona, Queens. But she is unable to estimate her annual income. “I don’t know because I don’t keep it,” she said. “I spend it all on the payments, on the rent, on food. I spend it every week.”

Grameen helps its clients in another way that many experts say is more important than increasing income — it establishes good credit scores. Many poverty alleviation groups have shifted their focus from saving to credit building, because people with poor or no credit must leave large deposits for basic needs like utilities, have trouble renting decent housing, pay much higher interest rates and have a harder time finding jobs.

Nayrobi Gonzalez de Quiroz, 26, recently received her first Grameen loan but decided not to follow through with her plan to buy handbags for resale. After using about $200 to pay off a debt, she said, she decided it was safer to leave the money in the bank and make the payments from her earnings as a manicurist.

“Here, you have to have good credit,” she said. “I have a young son and I have to think about his future.”