Companies that provide banking services in developing countries are attracting private investment. But is the industry losing sight of its mission to alleviate poverty?

.
From humble beginnings, microfinance—a system of providing tiny loans and savings accounts to the poor—has grown into a global industry attracting the interest of large multinational banks.
.
But the commercialization of the industry has sparked a fierce debate. Profit advocates highlight improved access to foreign capital and expertise; traditionalists say microfinance companies are in danger of becoming little better than predatory moneylenders.
.
There is little doubt that microfinance is now big money. In 2008 it attracted $14.8 billion in foreign capital, up 24% from the previous year. For the first time, the majority of the money came from private investors—including pension schemes and private-equity funds—rather than governments, according to the World Bank.
.

This deluge of private capital has freed many microfinance institutions from their reliance on donor funding. As a result some have switched from a not-for-profit strategy to a money-making business model. But there are concerns that such institutions are becoming distracted by the need to reward investors. Some microfinance banks have generated returns on equity of 50%; others have flooded the market with poorly structured debt.
. 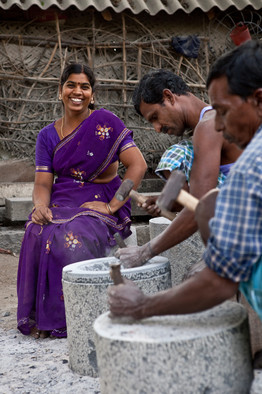 Indian sculptor Padmavathi received microloans from Hand in Hand to develop her and her husband’s businesses.

Maya Prabhu, head of philanthropy at U.K. private bank Coutts & Co., who advises wealthy clients on investments in microfinance, says: “There’s a definite risk of new shareholders switching microfinance institutions’ mission from alleviating poverty to chasing volumes and profits.”
.
Marilou van Golstein Brouwers, the head of microfinance investments at Triodos Bank, says the influx of so much private capital into microfinance is a mixed blessing.
.
On the one hand, private capital helps finance the growth of the sector and expand its reach. “At the same time, if the mission of microfinance institutions is only to maximize profit, then the social goal of helping people out of poverty is not reached,” Ms. van Golstein Brouwers says. “The problem is that a lot of the new private investors in the sector see it mainly as a way of making a lot of money.”
.
Nowhere is investors’ appetite for high, quick returns more apparent than in India. Between 2003 and 2008 the Indian microfinance market grew at a compound annual rate of 90%. It attracted around $200 million through 27 private-equity investments in 2009 alone, according to consultancy Venture Intelligence. This included money from blue-chip names such as Silicon Valley Bank and Sequoia Capital.
.
In January this year, U.S. private-equity fund Sequoia Capital paid just under $10 million for a 10% stake in Equitas, a leading Indian microfinance institution. Kalpathi, a local private-equity firm, bought the same stake only two years earlier for $750,000.
.

Some microfinance banks, typically backed by venture capital, are considering stock-market entry. SKS, the largest microfinance company in India and the fifth-largest in the world, is expected to be the first Indian microfinance institution to launch an initial public offering.

.
Paolo Brichetti is chief executive of MicroVentures, a fund that invests in the equity of microfinance institutions around the world, including five in India: Equitas, Sahayata, Grameen Koota, MV Microfin and BSS. “We’re helping to prepare some of them for initial public offerings in the next few years,” he says. “They are all growing on average by 50% to 70% a year, and some of them are doubling their clients every year. They could each raise $100 million through initial public offering.”
.
Investors are attracted by they fact that returns on microfinance investments are reasonably uncorrelated to other asset classes. They have also produced positive returns even in volatile times.
.
According to the World Bank, funds have enjoyed average annual returns of 6.3% for investing in the debt of microfinance institutions and 12.5% for investing in their equity. (However, most private-equity funds have a short track record in this area and have made very few exits.)
.
On average, funds even managed to produce positive returns during the height of the credit crisis in 2008 when emerging-market bond funds fell in value by 12%. Globally, microfinance also has an average non-performing loan rate of just 1%.
.

However, the market was not totally immune from the credit crisis. In Morocco, which was one of the fastest-growing microfinance markets, the percentage of loans for which a monthly payment was missed increased from 1.9% in 2007 to 10% in June 2009.
.
At Zakoura, one of Morocco’s biggest microfinance banks, the rate shot up to over 30% and it was forced to merge with a state-owned microfinance institution, Fondation des Banques Populaires, in the middle of last year.
.
The microfinance market in Bosnia and Herzegovina has been growing at rates of around 60% a year. The average percentage of loan portfolios for which a monthly payment was missed rose from 2% in 2008 to 8% in 2009. But as yet, no Bosnian microfinance institutions have gone bankrupt, missed payments on their debt or sought support from the government.
.
Xavier Reille, an analyst at Consultative Group to Assist the Poor, the World Bank’s microfinance analysis division, says problems were caused by over-lenient lending policies and poor information systems. But he adds that the microfinance industry is improving and a credit bureau is being set up to share information.
.

The rapid growth in India is also fueling fears that the market could overheat. Both the profits and loan volumes of the biggest firms are growing rapidly. The loan book of SKS, for example, grew from $21 million in March 2006 to $790 million in September 2009, while return on equity went from 3% to 15%.
.
Ms. van Golstein Brouwers of Triodos Bank, which has around $200 million invested in microfinance institutions, says: “Over the past year, particularly in India, there’s been a real focus on strong growth, so loans have been extended very easily. There’s a risk of making too many loans and getting people over-indebted.”
.
Some parts of India are in danger of becoming over-saturated with microloans. Balali Iyer, vice-president of microfinance at HSBC, says: “Indian microfinance institutions are aware that over-heating could become a problem, but they are working together to ensure it doesn’t.”
.
Prashant Thakker, global business head of microfinance at Standard Chartered, which has lent over $500 million to microfinance institutions in Asia and Africa in the last three years, acknowledges that some of the larger players in India are growing very fast.
.
But he also notes that microfinance has still only penetrated 10% of the Indian market. He believes there is a long way to go before demands for financial access are met.
.
“A lot of the growth is into new regions,” says Mr. Thakker. “And having access to private debt or equity capital helps make microfinance institutions more sustainable, rather than relying only on donor finance, which is unpredictable.”
.

Nonetheless, some experts fear that microfinance institutions lose track of their purpose when they become beholden to institutional investors.
.
One area of contention is interest-rate charges. Compartamos, the largest microfinance institution in Mexico, raised $400 million from an initial public offering in 2007. It charges interest rates of around 85%, while making a return on equity of around 40%. The average interest rate charged by microfinance institutions globally is 26%.
.
Compartamos’ co-founder and executive vice-president, Carlos Danel, accepts that rates are higher in Mexico than in other countries but says this is because the loans are typically much smaller.
.
“We could push people to borrow bigger loans, but we don’t believe in doing that,” he says. “In the four years since we’ve gone public our rates have gone down 10%, and we offer by far the lowest rates in the Mexican market. Taking the company public raises the bar in terms of performance, transparency and accountability.”
.