NEW DELHI — Despite last year’s global financial meltdown, the microfinance industry has continued to boom in India because of an influx of private equity and bank funding, according to a new study. 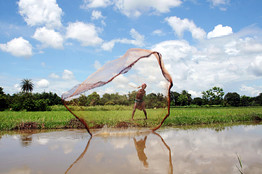 An Indian fisherman throws his net as he tries to catch fish in northeastern Tripura state capital Agartala.

Microlenders recorded a 60% increase in clients in India, to 22.6 million in the year ended March 31, 2009, from 14.1 million the previous year, according to a report from Access Development Services, a New Delhi-based nonprofit serving the microfinance industry. Microlenders lend small amounts of money to groups of poor people, mainly to help foster entrepreneurship and trade.

In contrast, the formal banking system in India recorded 15% growth over the same period in the number of poor and underserved clients it serves, expanding its reach to 54 million clients from 47.1 million clients, according to the study. For the last 15 years, the formal banking system has been partnering with nongovernmental organizations to deliver loans to people living below the poverty line (around 20,000 rupees a year, or $430) and people who live in remote areas.

At the current growth rate and with larger loan sizes, microlenders might outstrip the formal banking sector in lending volumes within a few years, said N. Srinivasan, the author of the study.

The surge in microloans has been fueled by a brisk flow of funds in the third quarter of this year, with about $130 million in global private-equity funds funneled into Indian microfinance institutions, according to the Center for Microfinance in Chennai.

“In the middle of last year, we thought for a while the meltdown would strike this sector, but we’ve seen that it’s been largely unscathed,” said Vipin Sharma, chief executive of Access Development Services. “Growth is as frenetic as it was before.”

Mainstream banks, in both the private and public sectors, are increasingly considering channeling funds into microfinance banks rather than directly to India’s poor. Four public-sector banks and three private-sector banks entered microfinance this year, making for a total of roughly 30 banks invested in Indian microfinance. Total bank funding for microlenders nearly doubled to $2.526 billion from $1.281 billion in the year ended March 31 from the previous year.

Some foreign banks have reduced their exposure to microfinance in response to the global economic downturn and less liquidity, and smaller regional microlenders are having a hard time accessing bank funds because of a recent loan repayment revolt in the southern state of Karnataka, Mr. Srinivasan said. Borrowers in two rural districts stopped repaying their loans en masse at the urging of local religious authorities who felt that microfinance had taken too strong of a hold in their community.

But several state banks and major Indian lenders stepped in to fill the gaps. At the same time, a number of major microlenders have pooled 28 million rupees to form Alpha Microfinance Consultants, which will set up a credit bureau to reassure investors and to prevent future repayment crises like the one seen in Karnataka.