Philippines Stands Out in Capital Markets

By P.R. VENKAT And CRIS LARANO

The Philippines has become one of Asia’s hottest markets for share and bond sales, getting a boost from a buoyant stock market and its recent acquisition of an investment-grade credit rating. 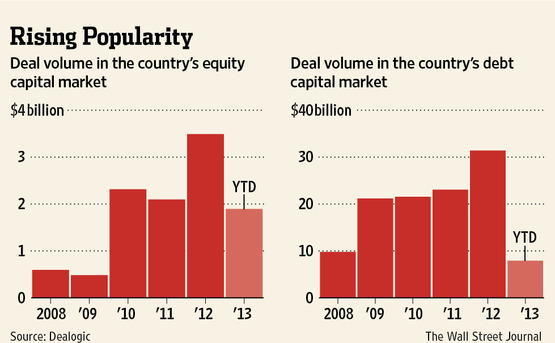 Deals totaling more than $1.5 billion are in the pipeline, and strong demand for recent sales could spark more activity in the country’s equities and bond markets. Overseas-listed companies with operations in the Southeast Asian country, such as casino operator Melco Crown Entertainment Ltd., MPEL +1.17% are taking advantage of an upbeat outlook for the Philippines’ consumption-driven economy to launch deals.

This month, the Asian Development Bank increased its forecast for the country’s 2013 economic growth to 6% from 5%. The Philippines has a population of 100 million. 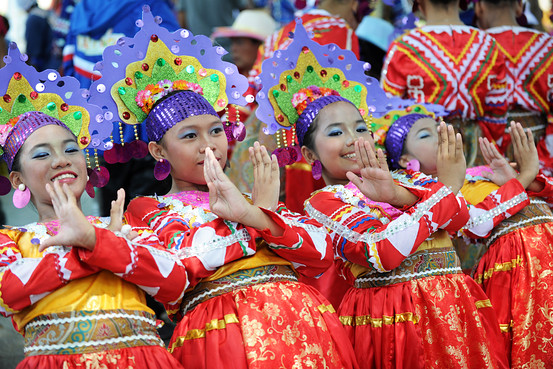 Agence France-Presse/Getty ImagesThe Philippines has become one of Asia’s hottest markets for stock and bond sales. Students earlier this month perform in the Aliwan Festival in Manila. The annual festival brings together performers from around the country to celebrate Filipino culture.

Last year, share sales totaled $3.5 billion, six times the $594 million raised in 2008, according to Dealogic data. Now, the country is in the third spot for equity fund raising in Southeast Asia, overtaking Malaysia, a favorite destination for deals last year.

In the debt market, the Philippines is leading in Southeast Asia, with about $8 billion raised so far this year. Last year, it was third.

Traditional fundraising hubs like Hong Kong have fallen behind so far this year as investors turn to Southeast Asia, where stock markets have surged on expectations of strong economic growth and rising domestic consumption.

Many were forced to issue more shares in order to remain listed after the country’s stock-market regulator began to more strictly enforce a rule on minimum public ownership last year. The handful of listed companies that failed to meet the Dec. 31 deadline have been suspended from trading since January, and will face delisting if they don’t hit the 10% level by June 30.

Investors’ appetite for the Philippines is strong. Mr. Tan’s LT Group Inc.LTG.PH +0.64% raised 37.72 billion Philippine pesos ($917 million) last week. Orders for the stock sale totaled $3.5 billion. The deal was priced at 20.50 pesos per share, the top of the range banks handling the deal had indicated to investors. More than half came from 11 cornerstone investors—buyers who agree to take large parcels of shares and hold them for a set period—including Fidelity and Morgan Stanley Investment Management.

“Deals are getting bigger…the country is on the radar screen of investors,” said Lauro Baja III, head of UBS UBSN.VX +2.89% Philippines, which managed the LT Group share sale.

Foreign companies are also benefiting from investors’ confidence in the Philppines. Apart from a $377 million share placement by Nasdaq-listed Melco Crown, which is going on now, Malaysia’s Genting Bhd. 3182.KU +2.40% and its Philippine partner are planning to list a Manila casino via an initial public offering that could raise more than $500 million.

San Miguel, which is managed by Filipino tycoon Ramon Ang and manufactures the country’s top-selling beer, said its $800 million bond sale this month attracted orders of more than $1 billion within the first hour. Orders for the deal, which attracted investors from Asia, Europe and the U.S. and was the country’s largest corporate bond sale ever, totaled almost six times the amount of debt for sale.

Corporate bond offerings in the Philippines used to meet with tepid demand from investors. That changed in March, when Fitch Ratings raised the Philippines’ long-term foreign-currency credit rating by a notch to BBB-minus, an investment grade

“Of late, we are starting to see more [corporate] issuers,” said Clifford Lee, managing director of fixed income at DBS Bank Ltd. Other deals in the pipeline include a $500 million Tier 2 capital bond, to be issued by Metropolitan Bank & Trust Co.,MBT.PH +0.32% and a $170 million peso-denominated bond from geothermal power producer Energy Development Corp., EDC.PH 0.00% according to regulatory filings.

But at the same time that companies are stepping up their bond issuance, sales from the government, the usual bond issuer, are falling.

National Treasurer Rosalia de Leon said Tuesday the government won’t issue bonds overseas this year because it doesn’t want to add to inflows of capital that have strengthened the peso. The government will issue bonds domestically. The Philippines, one of the most active Asian sovereign borrowers, usually starts selling debt overseas in the first quarter but hasn’t offered any so far this year.