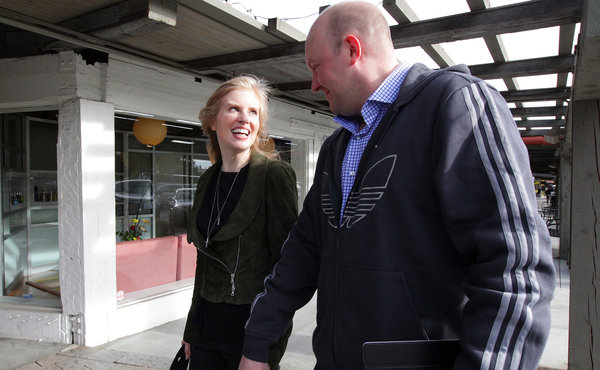 Laura Arrillaga-Andreessen, with her husband, Marc Andreessen, the Netscape co-founder, says that she was drawn to philanthropy because of her mother’s early death from cancer.

LAURA ARRILLAGA and Marc Andreessen are practically a royal couple around here. But when they met, on a New Year’s Eve date in 2005, Ms. Arrillaga didn’t care that Mr. Andreessen had made a fortune in Silicon Valley.

She cared whether he was giving money away. “One of the first questions I asked him on the night we met was what he was doing philanthropically,” she recalled.

Not your usual flirtation, but also not your usual romance. She is the daughter of a real estate billionaire and ended up marrying an almost-billionaire: Mr. Andreessen, co-founder of Netscape.

Yet the question she posed that evening still resonates. She is encouraging tech titans like her husband to become as famous for giving money as they are for making it.

Stars here often get rich in their 20s, but the tech industry over all has been criticized as being stingy when it comes to public charity. Some executives, like Bill Gates, wait until they retire to become active philanthropists. Others, like Steve Jobs, may not give much publicly during their lives. And while there is evidence that the valley is more philanthropic than it seems, Ms. Arrillaga-Andreessen, 41, says more could be done.

“The word ‘philanthropy’ brings up an image of somebody who’s had an illustrious career, has retired and is giving to highly established institutions that may or may not have ivy growing up their walls,” she says. “I personally have felt the need to give philanthropy a reboot.”

While attending the Stanford Graduate School of Business, she created a business plan for an organization that would teach philanthropy and make grants using strategies borrowed from the venture capital industry. The group, SV2, now has 175 donors who have financed 35 early-stage nonprofits over 13 years and last year gave away almost $500,000.

Ms. Arrillaga-Andreessen has taught a Stanford class on strategic philanthropy for 11 years and is on the board of her parents’ foundation. She started a center at Stanford to connect academics and nonprofits, and this fall published a book, “Giving 2.0: Transform Your Giving and Our World.”

But her most powerful weapon may be her personal cachet. Her father is John Arrillaga Sr., a commercial real estate developer who transformed this area from farmland into techdom’s epicenter. Her mother, Frances, was a philanthropist. Today she and Mr. Andreessen make a glamorous pair. They live in a grand home filled with abstract and pop art she selected. (She has two degrees in art history.)

Ms. Arrillaga-Andreessen has the ear of billionaires. She advised Mark Zuckerberg, founder of Facebook, and his girlfriend, Priscilla Chan, on their $100 million donation to Newark public schools, and is working with Dustin Moskovitz, another Facebook founder, and his girlfriend, Cari Tuna.

She is also close friends with   Laurene Powell Jobs, Mr. Jobs’s wife, who many assume will take responsibility for the family’s philanthropy.

Meg Whitman, the former eBay chief and gubernatorial candidate who now leads Hewlett-Packard, has taken advice from Ms. Arrillaga-Andreessen on her family’s giving. “What’s different here in Silicon Valley is people recently have made a significant amount of money much earlier in life,” Ms. Whitman said, “and I think Laura is beginning to change the dynamic here.”

Ms. Arrillaga-Andreessen said she was drawn to philanthropy because of her mother’s early death from cancer. “That inspired me to make a commitment to myself and to her and to God to live a life of service,” she said.

Philanthropy is more meaningful, she says, if people follow their passions but also do intensive research and evaluation.

Bradford K. Smith, president of the Foundation Center, a research organization, said: “This is a field that can run aground on the shoals of being excessively personal and anecdotal or being excessively strategic and analytical, and she weaves that middle ground in a way that speaks to a lot of people.”

Her philosophy fits into the Silicon Valley gestalt. When entrepreneurs, engineers and investors here give to charity, they are most comfortable with the strategies they apply in their day jobs. The Omidyar Network, for instance, started by the eBay founder Pierre Omidyar and his wife, Pam, uses a market-based approach to invest in for-profit companies and give grants to nonprofits. So does the Skoll Foundation, started by Jeff Skoll, eBay’s first president, which finances social entrepreneurs by using the same criteria that venture capitalists use to invest in start-ups. Nonprofits like Kiva, DonorsChoose.org, Samasource and Causes use the Internet to connect people in need with donors, jobs or supporters.

“Society can’t wait,” said Leslie H. Wexner, founder of Limited Brands, who says he gives 10 percent of his time and pretax income to the United Way, Ohio State University and other causes. “It’s sad there are so many entrepreneurs, business successes and venture capitalists who give no thought to society.”

Others here say they are too busy building businesses when they are young to focus on charity, and view their products as their contributions to the world.

“They understand their real contributions will not be through their philanthropy, but rather through their business judgment,” said Leslie Lenkowsky, professor of philanthropic studies at Indiana University.

That may be changing. In 1975, a vast majority of foundations and philanthropic assets were in New York. Today, California is on par with New York.

“Silicon Valley has become the epicenter of philanthropy in the U.S., if not the world,” said Mr. Smith of the Foundation Center. “Along the span of entrepreneurs’ lives, my guess is we’ll look back at this period and see a lot of them did a lot of philanthropy over a long period of time.”

Ms. Arrillaga-Andreessen talked to Mr. Zuckerberg and Ms. Chan about researching their grants, defining their goals and measuring the results. For example, the couple have directed some money to building a system for schools that tracks an array of data, including the number of students and achievement.

“The way she talks about it, it’s an intellectual process, it’s not just giving with your heart,” Ms. Chan said. “Her approach is almost like an engineering approach.”

With Ms. Arrillaga-Andreessen’s help, Mr. Moskovitz and Ms. Tuna are setting up their own foundation. “Since we’re starting in our 20s, we have decades to figure out how to have the biggest possible impact with the resources we have,” Ms. Tuna said.

Ms. Arrillaga-Andreessen declined to discuss the Jobs family’s charity, except to say that Ms. Powell Jobs is “a transformational philanthropist” and that “just because somebody is not giving publicly does not mean they’re not giving in a significant way.”

One of the biggest names in Silicon Valley to fall under Ms. Arrillaga-Andreessen’s influence is her husband.

“I always had the old-school model that I’m going to work for as long as I’m relevant and focus on for-profit activities and someday when I retire I’m going to learn about philanthropy,” Mr. Andreessen said. “Marrying Laura was a huge catalyst to change.”

In some ways, they are a pairing of opposites.

He speaks at triple speed, while she speaks slowly. She is also more reverent, referring to her husband in conversation as “my beloved.” They are intensely private homebodies, eating microwaved dinners at home most nights.

When they go out, it is likely to be for omelets and bottomless tea at Hobee’s, a Palo Alto diner (the Stanford Cardinal for her, with chicken, artichoke hearts and spinach, and the Mountain View for him, with mushrooms, peppers and sausage), or to appear briefly at parties.

AS for their own charity, they started the Marc and Laura Andreessen Foundation. She plans to spend the next year doing research before deciding where to give. They are interested in emergency services, a longtime cause of his, and furthering the field of philanthropy, a cause of hers.

“As attractive and innovative and glamorous as Silicon Valley is, it’s a really tough, competitive place where there’s tremendous pressure to make money,” said Mr. Smith at the Foundation Center. “But having accumulated the money, there’s a real practical problem: How do you find meaning in your life? How do you give it away?”