NAIROBI, Kenya—At a recent group-lending meeting in the Kawangware slum, about 10 miles from downtown, Jackson Munyovi sought $350 to build a new shanty for his wife and two children. 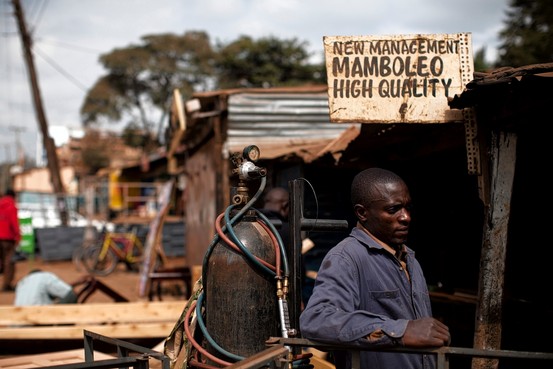 Nichole Sobecki for The Wall Street JournalJackson Munyovi borrowed $350 to build a new shanty for his two children and wife.

The 31-year-old welder asked fellow church congregants and friends to co-sign a loan to finance building materials. A church deacon vouched for the borrower’s assets, including a few metal-shop machines and his marital bed, and Mr. Munyovi promised to repay the loan in six months, plus 8% interest.

And with that, Equity Bank Group—one of Africa’s most ambitious banks—snagged another customer.

The Kenyan bank has enjoyed a booming business lending to people with little collateral beyond the potential disgrace of letting friends down. Equity executives aren’t shy about a business model that leverages societal mores and shame—often the strongest collateral to be found on a continent where formal credit records are scarce beyond the biggest cities.

“If a woman secures a mortgage with her matrimonial bed, she will never default,” declares Chief Executive Officer James Mwangi. “And other women will support her just to ensure that that matrimonial bed is not removed when the husband is not there. Here, social relationships are more valuable than economic relationships.”

In this field, known as microlending, Equity executives say their main competition isn’t other banks—it is the bedroom mattresses where many Africans store their savings. Nearly 90% of Equity’s customers are first-time bank clients, Mr. Mwangi said.

The unbanked represent about 80% of Africa’s adult population, or 326 million people, according to banking-industry estimates. Most of those people are employed in Africa’s massive informal sector—a term describing an untaxed, unregulated part of the economy. 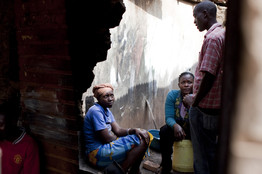 Other Kenyan banks, particularly Kenya Commercial Bank, also are expanding their customer bases by targeting small borrowers in the informal economy, but none have caught up with Equity, which pioneered the idea of signing the unbanked in Kenya and fortified its position with the nation’s largest network of storefront banking agents.

That leaves Equity with few competitors in Africa and none that can match its scale.

The bank started out as Equity Building Society in 1984, a mortgage financier for low-income Kenyans. The company nearly collapsed by the 1990s due to management shortcomings, a downturn in the nation’s banking sector and nonperforming loans topping 54% of its portfolio.

Mr. Mwangi joined the bank in 1993 after working for Ernst & Young and Trade Bank, a now-defunct Kenyan bank, and was its chief executive officer by 2004. He is credited with fashioning its microlending strategy and steering it toward profitability by targeting individuals with deposits of less than $200 and little collateral beyond the willingness of friends and neighbors to vouch for them.

For the bank, amorphous social relationships that bind communities—church and mosque associations, tribal and familial relationships, company and school affiliations—became a hard asset.

In their lending decisions, executives used a hybrid approach that combines hard-nosed cultural analysis with microlending techniques. Such methods are common at nonprofit institutions, but Equity has used them to make money.

In 2011, pretax profit surged 42% to $150 million, making it Kenya’s second-most profitable bank after Kenya Commercial Bank. About a third of Equity’s loans in 2011 were noncollateralized payday advances for as little as $12 for civil servants who agreed to repay the loans with 10% interest taken out of their next paycheck.

An additional 11% of Equity’s loans were to small enterprises such as fruit stands, used-clothing racks and hair salons. Collateral can include anything from furniture, household appliances or the business’s assets.

Upon repayment, borrowers can qualify for loans of $590 and then $886 to be paid over the same term. The final step for new borrowers is a $1,200 loan to be paid within a year.

Godfrey Chege is one such customer: He received a loan for almost $1,200 from Equity to expand his chicken-selling business. He and his wife pledged their bed as collateral.

Eighteen months after Equity opened an office in Kibera, one of the world’s largest slums, the branch had more than 15,000 clients, according to Francis Mbindyo, a manager of the recently opened Kibera branch.

Customer lines at other Equity bank branches often snake out the front door. Mr. Mbindyo says borrowers must also be part of a loan group of at least a dozen people willing to be co-signers.

Nonperforming loans accounted for 2.7% of Equity’s total portfolio, according to the company’s most recent quarterly statement.

For 88% of Equity’s customers, the bank was the first bank at which they ever opened an account, and more than three-quarters of Equity’s loans are unsecured by collateral.

Equity also uses an agency model in Kenya, paying commissions to storefront operators who act as remote bank tellers in rural areas. The bank had nearly 4,000 agency locations in March 2012, compared with 875 at the beginning of 2011. One-fifth of Equity’s cash transactions are done through agents, according to company statements.

Equity is also expanding regionally. The bank has opened a total of 51 branches in Uganda, South Sudan and, most recently, in Rwanda and Tanzania. Those forays were preceded by yearlong executive-training programs for local staff, said Mr. Mwangi.

“We want to be an international bank that is a local bank in every community,” he said.

Fruit farmer Thomas Kimote’s first Equity loan was for about $200 four years ago. He used the money to expand his operation and he now supplies several of Kenya’s largest grocery stores.

“I am more of distributor now,” said Mr. Kimote.

Mr. Mbindyo, Equity’s Kibera branch manager, said that Mr. Kimote’s business had resulted in other customers for the bank, including his suppliers, his drivers and others linked to his enterprise.

A version of this article appeared July 23, 2012, on page C1 in the U.S. edition of The Wall Street Journal, with the headline: Finding Big Profits In Many Little Loans.