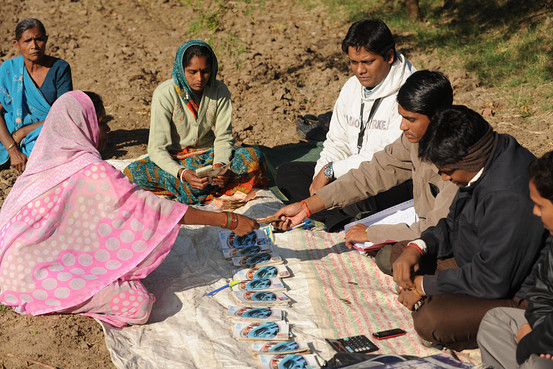 Sam Panthaky/Agence France-Presse
Officials from SKS Microfinance Ltd. received a weekly installment from a borrower in a village near Ahmedabad, Gujarat, Jan. 6, 2011.

Lending to India’s poor is a good business once again.

Just two years ago some of India’s microfinance companies–which give tiny loans to the poor–were struggling to stay afloat as they grappled with bad loans, a lack of funding and allegations their lending practices were pushing some borrowers to suicide.

The Reserve Bank of India stepped up in 2011 to help avoid an implosion in the industry and implemented new rules, bringing microloan companies under its purview for the first time.

“A lot of good has happened,” said Dilli Raj, chief financial officer of SKS MicrofinanceLtd.533228.BY +4.04%, one of India’s largest microlenders.  “We have a lot more regulatory clarity with Reserve bank of India asserting itself as the sole regulator of the sector. There is more funding certainty.”

SKS Microfinance, one of the innovators in the industry in India, reported its highest quarterly profit in three years on Friday. Net profit for the Hyderabad-based company for the October to December period was 210.4 million rupees–close to 20 times its profit a year earlier–as loan disbursements jumped 79%. The company’s shares have shot up in recent months to more than double last year’s low.

The return of microfinance comes even as India wrestles with slowing economic expansion. India’s gross domestic product growth is expected to slow to an 11-year low of less than 5% in the fiscal year ending March.

While India’s paralyzing regulations are often blamed for the country’s troubles, the resurrection of microfinance is a telling example of how sometimes the right rules can save an industry.

The Reserve Bank of India has long stressed the need for microfinance in India, where a majority of the 1.2 billion-population lack access to basic banking services. Microfinance companies in India usually borrow from mainstream banks and provide loans as small as $200 to poor borrowers, mostly women, for starting small businesses such as buying livestock.

The microloan companies operate in areas where there are no bank branches and people traditionally have relied on loan sharks who charge exorbitant rates.  As the microfinance industry was taking off over the last decade, the initial thinking in the RBI was to allow the small lenders to evolve on their own without many central bank restrictions.

In 2010, SKS Microfinance had millions of borrowers and became the first microfinance company to list its stocks. It raised $350 million backed by global investors like George Soros‘s fund Quantum (M) Ltd. and Sequoia Capital. The listing raised hopes microfinance could be a profitable way to bring millions into the financial mainstream.

But by the end of 2010, the industry went into a tailspin.

The shakeout started in the state of Andhra Pradesh, then the largest market for microfinance companies.  After a spate of suicides by farmers who had microloans, local politicians alleged the borrowers had been fooled into taking on too much debt. The industry denied it was responsible for the suicides.

The state slapped new restrictions on what the lenders could charge and required them to get government approval before giving new loans. Politicians told borrowers they didn’t have to pay back their microloans. 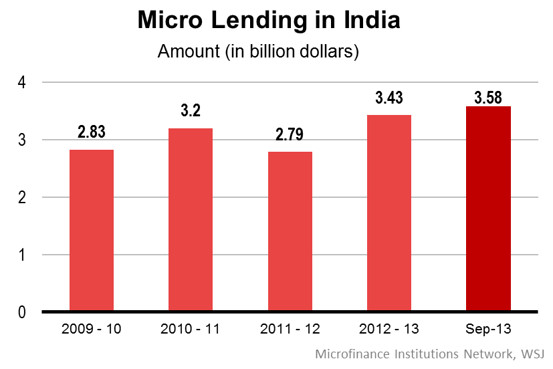 The new rules made it near-impossible for SKS and others to continue to give out microloans. Mainstream banks–fearing other states might take similar actions–cut back on their lending to the industry. Growth at the companies, which had been growing at double digit rates for years, hit a wall. Smaller firms went out of business.

SKS cut costs by shutting branches and trimming its work force, while other micro-lenders, like Spandana Sphoorty Financial and Asmitha Microfinance, restructured their debt.

In 2011, the Reserve Bank of India decided to step in and help. It came up with a regulatory framework for microfinance companies that included capping the interest rate as 26%. The steps bought uniformity to the industry and more importantly they signaled the RBI still considered microfinance a legitimate industry despite what some politicians were saying.

“The intense engagement of the government and the Reserve Bank of India have helped change risk perceptions,” said Alok Prasad, the chief executive of the Microfinance Institutions Network, an industry group.

The RBI’s backing renewed India’s banks confidence in these companies and they resumed lending to them. Funding from banks in the July to September period last year jumped nearly fourfold from the previous quarter to around 38 billion rupees.

More bank loans freed up the microfinance companies to give more microloans. Total lending by microfinance institutions grew by 30% in the quarter ended September 30 compared to a contraction of 15% a year earlier, according to Microfinance Institutions Network.

The new funds have helped people like Madhuri Saini, a 37-year-old mother of two. Ms. Saini is doing a brisk business, as a seamstress out of her small shop in Jaipur in western India. Late last year she got a $680 loan from Bandhan Financial Services to expand her business.

“The big banks would never lend me such as small amount,” she said.

While many of the smaller micro-lenders are still struggling and some of the country’s biggest micro-lenders— including Bhartiya Samruddhi Finance Ltd. and Trident Microfin Pvt.– are still restructuring their debt, analysts say the industry is in much better shape than it was a year ago.

The resurgent microlending sector has a new profile. With microlenders in Andhra Pradesh still wrestling with suspicious government regulators, the eastern state of West Bengal and southern state of Tamil Nadu are now the biggest microloan markets.

The biggest companies in the industry have also changed. Bandhan Financial of Kolkata in West Bengal, has overtaken SKS to become the biggest lender by number of loans disbursed.