What Makes The Microfinance Sector Attractive to PE Investors? – WSJ.com

What Makes The Microfinance Sector Attractive to PE Investors? – WSJ.com

.
Reader Discussion: Inspired by a report describing the attractiveness of the Banking and Financial Services Sector for the PE Investor, Mentors this week will discuss the universals that make a sector attractive.

.
In a recently published report, credit venture intelligence, three articles comprehensively lay out the attractiveness of microfinance as an investment sector. 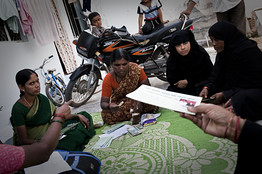 File photo of women are seen gathered and exchanging money in a micro-finance group in Andhra Pradesh, India. Sanjit Das for The Wall Street Journal

.
Samir Bali, Partner at Ernst and Young India writes that partnerships with local vendors including postal departments, the establishment of a credit information bureau and RBI’s revision of mobile banking have collectively led to the massive growth of the sector. Scale, fiscal controls and access to easy transactions mark these initiatives. Mr Bali clearly states that fundamental challenges still remain.

.
In this context, Sasha Mirchandani, Prashant Choksey and Anil Joshi make the case for a broader acceptance of the utility of interpreting the semantics of microfinance as “Reaching those excluded from formal financial services”. As a market definition this then includes the geographically isolated as much as the socially and economically excluded.

.
“Microfinance is a sector that has opportunities for all investors” said Arun Natarajan, MD and CEO of Venture Intelligence. “The first two stages required smaller, sector specific investors but now it has moved to classic PE territory”, he said.

.
In an earlier post Sanjay Anandaram argues for smaller funds in small economies; he says small startups typically do not require large capital infusion at early stages. In contrast, Microfinance becomes a target for constant investment as it requires regular capital infusion – more access, means more loans which then means greater capital adequacy to meet RBI guidelines and better infrastructure. Engineering Construction, according to Mr Natarajan, could also be another example of a sector constantly needing equity to even sit on the bidder’s table. The perfect setting for Private Equity and Venture Capital Investments.